Just a few days into the new year is the first astronomical event of 2019. The Quadrantid meteor shower is expected to light up the night sky with shooting stars. In terms of numbers, the Quadrantids have the potential to be one of the top 3 meteor showers of the year, with a viewing rate of anywhere from 25 to 120 meteors per hour. But they are not widely observed because the weather in early January is often not conducive for stargazing. But if you do have clear skies in the forecast the night of January 3rd, it’s definitely worth being on the lookout.

A possible Quadrantid meteor appears over a snowy Wyoming cabin in 2017.

Quadrantid meteors are thought to originate from debris left by an asteroid named 2003 EH1. This asteroid was only discovered in 2003, but the meteor shower has been observed since the 1820’s. The name comes from the constellation Quadrans Muralis. If you have never heard of it, that’s because this constellation is no longer recognized today as 1 of the 88 official constellations. But despite this, the name stuck for the meteor shower. The meteors appear to radiate from the modern constellation known as Boötes, in the northern sky in between Hercules and Ursa Major (the Big Dipper). But you don’t necessarily have to know where Boötes is to enjoy the show, since meteors can appear anywhere in the sky. 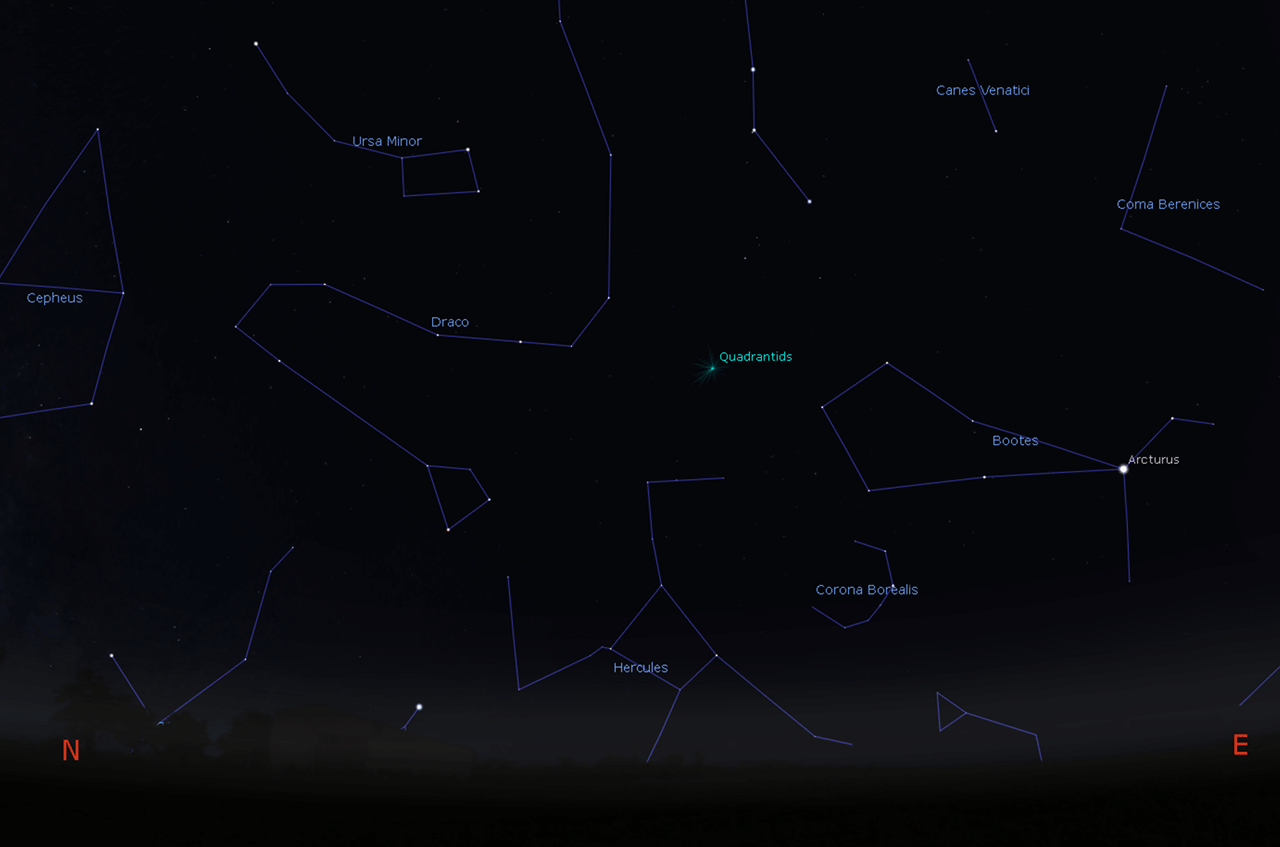 The position of the radiant as it appears at 2:00 UTC from western Europe. Screenshot from Stellarium

Meteor showers are one astronomical event that is highly affected by light pollution. Under a city sky you may only see a handful of the brighter meteors. But from a dark sky the meteor rates increase greatly. The Quadrantids meteors are dimmer on average than other meteor showers, so viewing from a dark sky is even more important. Check out the list of dark sites or use the light pollution map to find your own spot. Look for a place with a wide open view of the sky without trees, hills, buildings, etc. in the way. The northern hemisphere is favored over the southern hemisphere because the radiant rises higher in the sky. Unfortunately for southern hemisphere viewers, they will be lucky to see any. 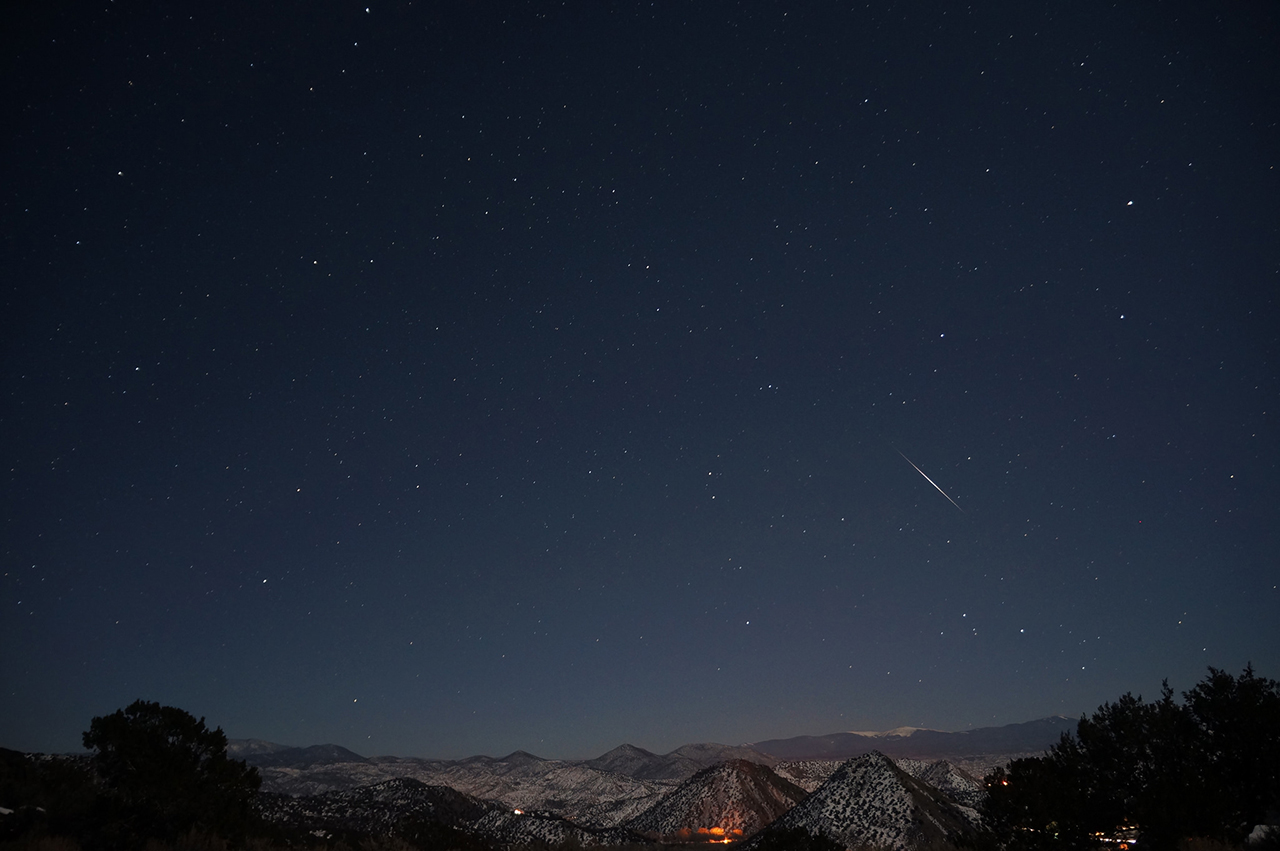 A Quadrantid meteor is seen from New Mexico in 2013. Picture by Mike Lewinski

The meteor shower will peak on the morning of January 4th. According to the International Meteor Organization, the best time will be 2:00 UTC. Compared to other showers, the Quadrantids peak is very narrow lasting a matter of hours, before declining sharply. If the prediction holds true, then Europe is favored since the radiant will be higher in the sky at 2AM. But meteor showers aren’t always predictable so it’s worth watching from anywhere in the northern hemisphere. Reduced rates of Quadrantids can be seen anytime from January 1st – 10th. While meteor numbers vary from year to year, the biggest factor is usually moonlight. The moon phase is very favorable in 2019, since the new moon comes just 1 day later. 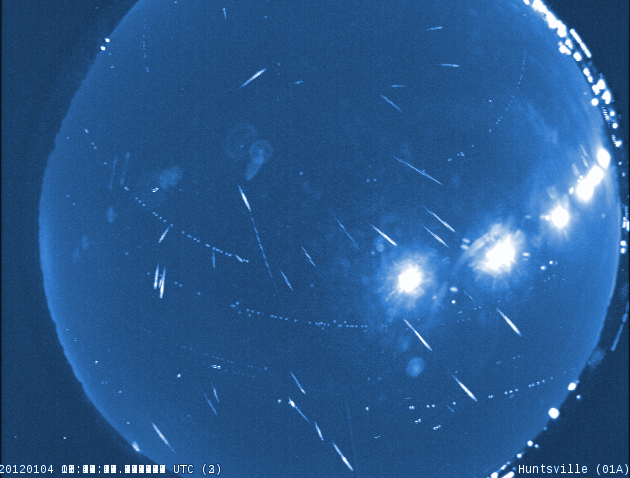 Quadrantid meteors are seen in the skies above Alabama in 2012. Image from NASA 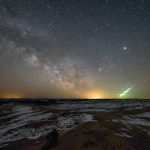